Use your voice to help safeguard the grizzly bear’s future in Alberta. Tell the provincial government that it’s time to take action for our threatened grizzlies today.

The majestic grizzly bear is an iconic symbol of the wild and a cherished part of Alberta's cultural identity. As an umbrella species, their protection benefits biodiversity and ecosystem conservation across the wide landscapes they roam. Working in partnership with EXPOSED Wildlife Conservancy, our goal is to ensure that grizzly bear management in Alberta continues to work toward recovery and coexistence with input from all stakeholders, including First Nations.  ‍

DONATE TO OUR EFFORTS

Now more than ever, we need the Alberta government to fund and implement their Grizzly Bear Recovery Plan in its entirety. The future of Alberta's grizzlies depends on it.

The majestic grizzly bear is an iconic symbol of the wild and a cherished part of Alberta's cultural identity. As an umbrella species, their protection benefits biodiversity and ecosystem conservation across the wide landscapes they roam. Grizzly bears have been classified as a Threatened species in Alberta since 2010. New research data released in March 2021 showing an increase in Alberta's grizzly populations are cause for hope, but the road to recovery is far from over. With a population estimate well below the International Union for Conservation of Nature’s criteria for threatened status, Alberta grizzlies are clearly a species at risk. The combined impacts of the habitat loss, food security, coexistence challenges, and the climate crisis continue to put enormous pressure on recovering grizzly bear populations. ‍

Of all the challenges grizzlies face on the road to recovery, hunting is the one source of human-caused mortality we can control. As part of the Recovery Plan we urge the provincial government to commit to a continued ban on grizzly bear hunting in Alberta.

Through storytelling and advocacy, we aim to raise public awareness on the status of grizzlies in Alberta and influence the provincial government to implement their Grizzly Bear Recovery Plan and commit to a continued ban on grizzly bear hunting in the province. Please join us as we work to recover Alberta's grizzlies, together.

You can take action by writing a letter to your Alberta MLA and the Alberta Minister of Environment and Parks using this simple form letter/email, by donating to our efforts, or by sharing our social media content with your friends and family. 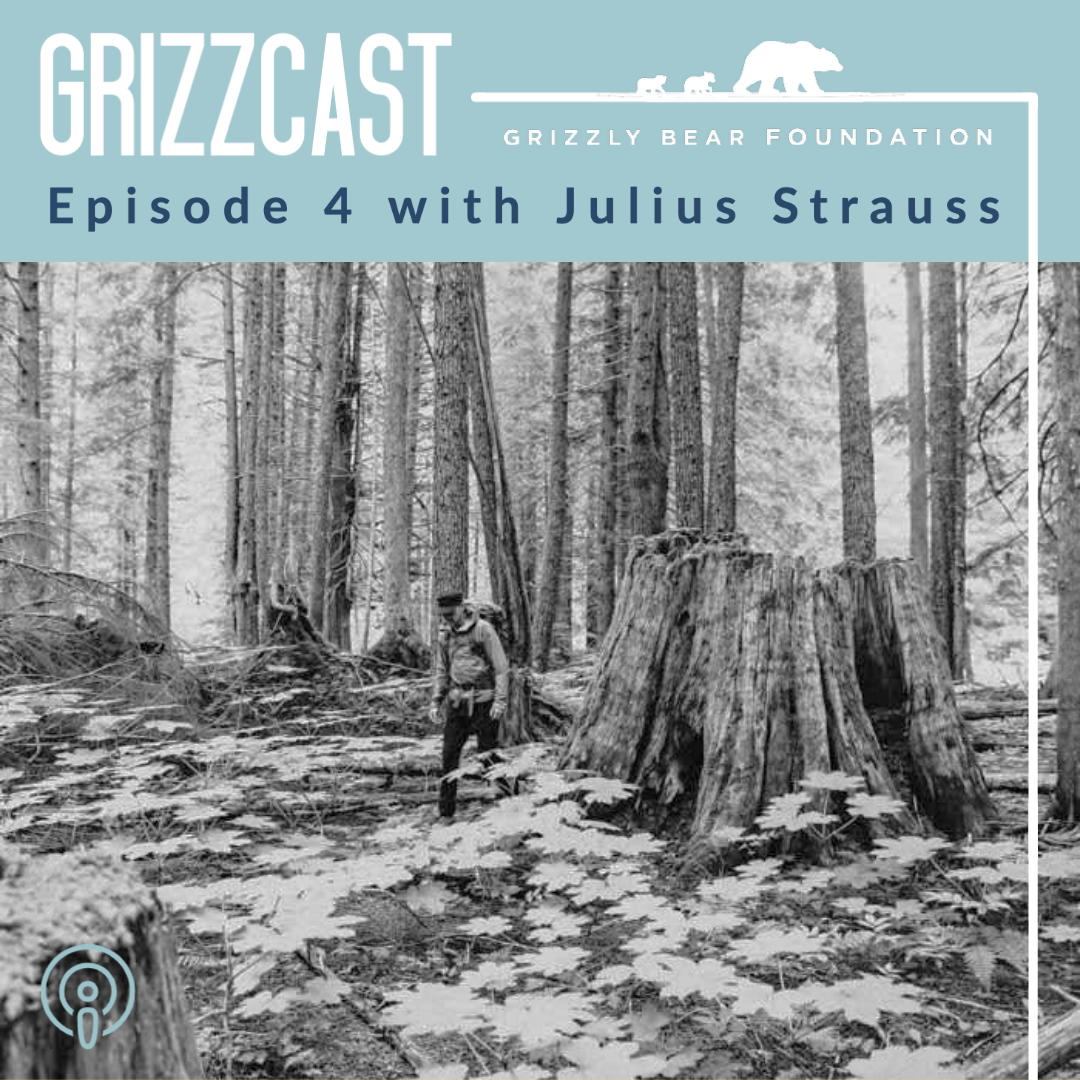 In a new GrizzCast podcast episode, "Common Ground", we chat with Julius Strauss, a former war correspondent, wilderness guide and activist. Together, we explore a world where grizzly bears are no longer hunted for their hide, paws, teeth or head. 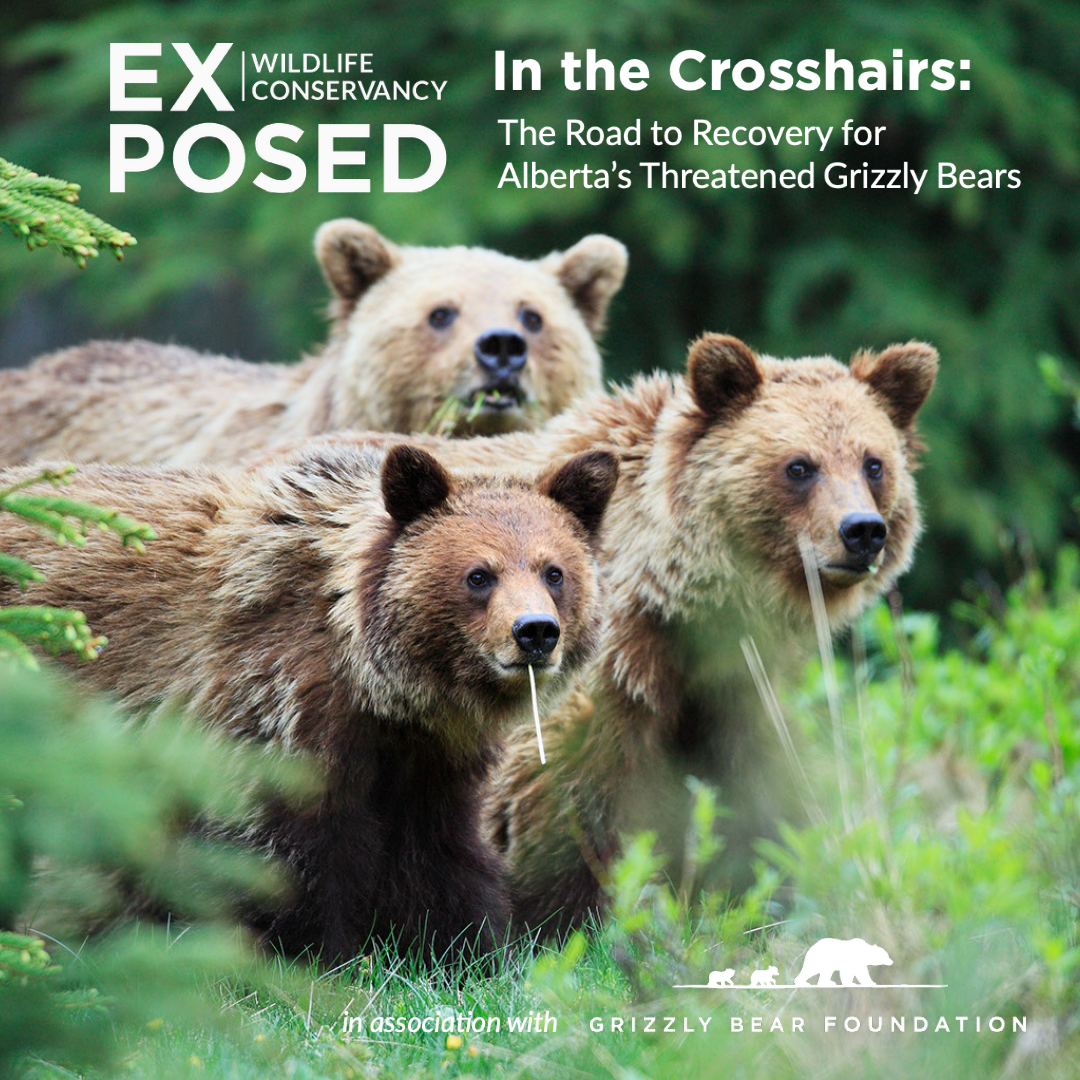 "In the Crosshairs" Documentary Film

This short documentary by EXPOSED Wildlife Conservancy tells the story of the past, present, and future of grizzly bear recovery in Alberta, Join us to learn how you can take action, as we explore trophy hunting, habitat loss and coexistence issues, together.

Centuries of habitat loss and persecution by European settlers led to the dramatic decline in the size and distribution of grizzly bear populations across North America. Grizzly bears once roamed widely across Alberta and eastward through the plains of Saskatchewan and Manitoba.

Today, grizzly bears have primarily been extirpated from the prairies, and in Alberta are found solely in the Rocky Mountain and Foothills regions at the province’s western fringe. With the release of new research in 2021, Alberta now has science-based population estimates for all 7 of the province’s bear management units. The data shows that Alberta’s grizzly bear population has increased from approximately 700 in 2010 to somewhere between 856 and 973 bears today.

This success has resulted from decades of conservation efforts, most notably the government’s decision to end the licensed grizzly bear hunt in 2006. But the road to recovery is far from over, and we worry the government will use this data to justify bringing back the hunt. Grizzly bears are iconic symbols of the wild. They represent an important part of the cultural identity of Albertans. As a conservation umbrella species, their protection is critical to maintaining the biodiversity of our ecosystems across the wide landscapes they roam.

DONATE TO THIS CAMPAIGN

Grizzly bears were classified as a Threatened Species under Alberta's Wildlife Act in 2010.

In 2012, the western population (including Alberta’s grizzlies) was federally designated as a Species of Special Concern by the Committee on the Status of Endangered Wildlife in Canada (COSEWIC).

The grizzly bear hunt ended in Alberta in 2006.

The latest research estimates that there are somewhere between 856 and 973 bears in Alberta.

In 2018, there were 23 recorded grizzly bear mortalities. At least 20 of those deaths were attributable to human causes.

The first draft of a 5 year Recovery Plan was completed in 2008, and was accepted by the Minister for implementation. In 2010, an updated status assessment was completed, ultimately resulting in the formal designation of ‘Threatened’ for the species. Alberta’s Grizzly Bear Recovery Plan was updated in 2016, and again in 2020. A later revision to the Recovery Plan (dated July 1, 2020) was released in early 2021 but remains substantially the same as the 2016 draft.

National Status: In 2018 the western population of grizzly bears was designated as a species of Special Concern under Canada’s Species at Risk Act.